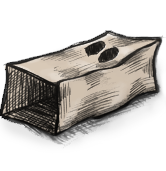 “Six months ago, her old doctor at the Henry J. Hamilton Rehabilitation Center had put her back on all her medications after somebody disguised in a paper bag had tried to strangle her in front of the Tobacco Friendly. Though she described the sack perfectly, even drew a picture of it down at the station, the cops never found a single suspect.”

From Donald Ray Pollock, author of the highly acclaimed The Devil All the Time and Knockemstiff, comes a dark, gritty, electrifying (and, disturbingly, weirdly funny) new novel that will solidify his place among the best contemporary American authors.

It is 1917, in that sliver of border land that divides Georgia from Alabama. Dispossessed farmer Pearl Jewett ekes out a hardscrabble existence with his three young sons: Cane (the eldest; handsome; intelligent); Cob (short; heavy set; a bit slow); and Chimney (the youngest; thin; ill-tempered). Several hundred miles away in southern Ohio, a farmer by the name of Ellsworth Fiddler lives with his son, Eddie, and his wife, Eula. After Ellsworth is swindled out of his family’s entire fortune, his life is put on a surprising, unforgettable, and violent trajectory that will directly lead him to cross paths with the Jewetts. No good can come of it. Or can it?

In the gothic tradition of Flannery O’Connor and Cormac McCarthy with a healthy dose of cinematic violence reminiscent of Sam Peckinpah, Quentin Tarantino and the Coen Brothers, the Jewetts and the Fiddlers will find their lives colliding in increasingly dark and horrific ways, placing Donald Ray Pollock firmly in the company of the genre’s literary masters.

The Devil All the Time

From the acclaimed author of Knockemstiff—called “powerful, remarkable, exceptional” by the Los Angeles Times—comes a dark and riveting vision of America that delivers literary excitement in the highest degree.

In The Devil All the Time, Donald Ray Pollock has written a novel that marries the twisted intensity of Oliver Stone’s Natural Born Killers with the religious and Gothic over­tones of Flannery O’Connor at her most haunting.

Set in rural southern Ohio and West Virginia, The Devil All the Time follows a cast of compelling and bizarre characters from the end of World War II to the 1960s. There’s Willard Russell, tormented veteran of the carnage in the South Pacific, who can’t save his beautiful wife, Charlotte, from an agonizing death by cancer no matter how much sacrifi­cial blood he pours on his “prayer log.” There’s Carl and Sandy Henderson, a husband-and-wife team of serial kill­ers, who troll America’s highways searching for suitable models to photograph and exterminate. There’s the spider-handling preacher Roy and his crippled virtuoso-guitar-playing sidekick, Theodore, running from the law. And caught in the middle of all this is Arvin Eugene Russell, Willard and Charlotte’s orphaned son, who grows up to be a good but also violent man in his own right.

Donald Ray Pollock braids his plotlines into a taut narrative that will leave readers astonished and deeply moved. With his first novel, he proves himself a master storyteller in the grittiest and most uncompromising American grain.

Excerpt of The Devil All the Time at Scribd.

Spanning a period from the midsixties to the late nineties, the stories in Knockemstiff feature a cast of recurring characters who are woebegone, baffled, and depraved—but irresistibly, undeniably real. Rendered in the American vernacular with vivid imagery and a wry, dark sense of humor, these thwarted and sometimes violent lives jump off the page at the reader with inexorable force. . . . Donald Ray Pollock presents his characters and the sordid goings-on with a stern intelligence and a bracing absence of value judgments. . . . Knockemstiff is a genuine entry into the literature of place.

Excerpt of Knockemstiff at Scribd.